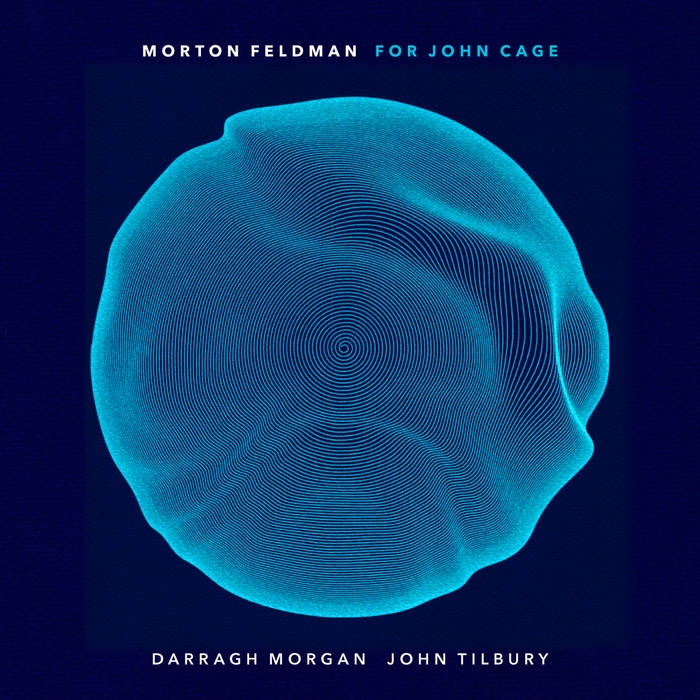 Richard Erickson This has to be the definitive version.

'The actual performance has a fascinating tension.... when it's over you're not changed, exactly, but you're a sightly different person just the same.'
-The Wire

'Tilbury makes a fine partner, his playing as impeccably judged and graded as Morgan's...As the two performers gradually edge closer to each other with a shared sense of purpose during the work's closing gestures, there's something deeply moving about their precision, their sonic inventiveness, and their respect for each other'
-The Strad

‘The enlightening and perturbing performance of Morgan and Tilbury, so much in confidence with the American master’s poetics as to be able to fully unleash its intrinsic dramatic value...the skill of a veteran like John Tilbury and Darragh Morgan’s all but slavish reading take on a revealing power in this formidable independent release, an essential component in demonstrating the potential for expansion in the reading keys of Morton Feldman’s repertoire’
- esoteros.net


'But in these times there’s time, and it passes swiftly as this hushed, slow music — an assembly of repeated, subtly modulated, spare fragments — weaves a compelling spell, thanks to the rapt concentration of the violinist Darragh Morgan, who plays without vibrato but with pinpoint tuning, and the pianist John Tilbury.'
- Sunday Times


'Darragh Morgan and John Tilbury are ideal interpreters: they are both veterans of contemporary classical chamber music, and in particular of Feldman.... It is Morgan and Tilbury’s astonishing feat that not once do they lose concentration, and not once does the music sound anything other than organic and spontaneous. Here is where their years with the work has reaped dividends, and this listener was rapt.'
- Journal of Music


'You imagine you are living in a pre-COVID time and everything is still possible. No more words. Just listen.'
- Norman Lebrecht


'A violin harmonic glowing from out of a piano tone, a touch of sul ponticello gruffness with which the violin comes near speaking, how the piano in this three-note descent is softly but surely warmed into sounding, how the violin is fragile and yet persists, how the two just now fold quietly together. But it probably will not. For this is one of the music’s lessons: irretrievability. And there is another here: indifference, how the music is not attuned to your desires. The music is not listening to you.'
- Paul Griffiths Record of the Week

'A gorgeous new recording of one of Feldman’s most elusive scores, with one of the composer’s greatest interpreters at the piano and an ideally poised violinist partner.'
- National Sawdust Log

"Embedded in harmonic colour, with the finest sonic detail, the album is a feast."
- Jari Kallio (Chamber Music Album of the Year)

The story of how Morton Feldman and John Cage first met has now become elevated to the status of legendary musical folklore. During a 1950 New York Philharmonic performance of Webern’s Symphony Op. 21, Feldman decided to leave the concert at the interval. In the lobby he met Cage. As Cage says, “we both walked out of a Philharmonic concert in which Webern had just been played, and we shared the desire not to hear anything else because we had been so deeply moved.” It was the beginning of a deep friendship that was to influence both their respective creative spirits. Morton Feldman became a friend, flatmate and student of John Cage.

Feldman’s interest in visual art strongly influenced his early works, and by the 1970s he was fascinated by handmade weaving techniques – musical symmetry literally referenced in his work ‘Crippled Symmetry’. Feldman wrote “For me, stasis, scale, and pattern have put the whole question of symmetry and asymmetry in abeyance.” In his other late violin and piano work ‘Spring of Chosroes’ from 1977, the title in fact directly refers to the name of a carpet, the spring carpet made for Sassanian King Chosroes I, whose dynasty ruled the Persian Empire from AD 211 – 651.

Violinist and dedicatee Paul Zukofsky writing to Morton Feldman stated “I can tell you that when playing your recent music, I feel very close to those rug-makers working away – first the border, the same stitch so many times, now a different strand, fewer times, now we start a pattern, it’s finished, a background... the rug making explanation helps account for the tiny variations you play with in timing and intonation – the equivalent of the irregularities in a hand-sewn rug.”

Feldman said of ‘For John Cage’ “it’s a little piece for violin and piano but it doesn’t quit.” It exists as a plateau of existential sound, pianissimo with almost entirely still gestures throughout.

I was first introduced to the music of Morton Feldman nearly 25 years ago by Paul Zukovsky who was then my musical mentor and who had premiered ‘For John Cage’. This close connection to Feldman’s art had a profound effect on me. I learnt much from my musical encounters with Zukofsky about Feldman’s use of mean-tone intonation and the obvious influence of this on the expressivity of his string writing, but it was only when I met pianist John Tilbury and had conversations with composers who knew Feldman personally – Chris Newman and Howard Skempton – that I felt I was really beginning to understand his musical personality.
I was already experimenting with using a baroque bow in performances of certain music by Cage and Feldman. The ethereal tone these more curved and lighter/shorter bows can produce seemed the most natural tool for conveying the desired articulation, and also Feldman’s constant wish and marking in his late scores that every gesture should dissipate naturally with an upwards and downwards sotto voce expressive marking.

I abstain from any use of vibrato as this hugely helps with my vision of the types of nuance and timbral purity this piece requires and of course this complements John Tilbury’s immaculate pianistic touch. To close, here is a quote by Cornelius Cardew from the early 1960s that evokes wonderfully the atmosphere created in ‘For John Cage’.

“Almost all of Feldman’s music is slow and soft. Only at first sight is this a limitation. I see it rather as a narrow door, to whose dimensions one has to adapt oneself (as in ‘Alice in Wonderland’) before one can pass through it into the state of being that is expressed in Feldman’s music. Only when one has become accustomed to the dimness of light can one begin to perceive the richness and variety of colour which is the material of the music. When one has passed through the narrow door and got accustomed to the dim light, one realises the range of his imagination and the significant differences that distinguish one piece from another...

Feldman sees the sounds as reverberating endlessly, never getting lost, changing their resonances as they die away, or rather do not die away, but recede from our ears, and soft because softness is compelling, because an insidious invasion of our senses is more effective than a frontal attack, because our ears must strain to catch the music, they must become more sensitive before they perceive the world of sound in which his music takes place.”