For Violin and Electronics 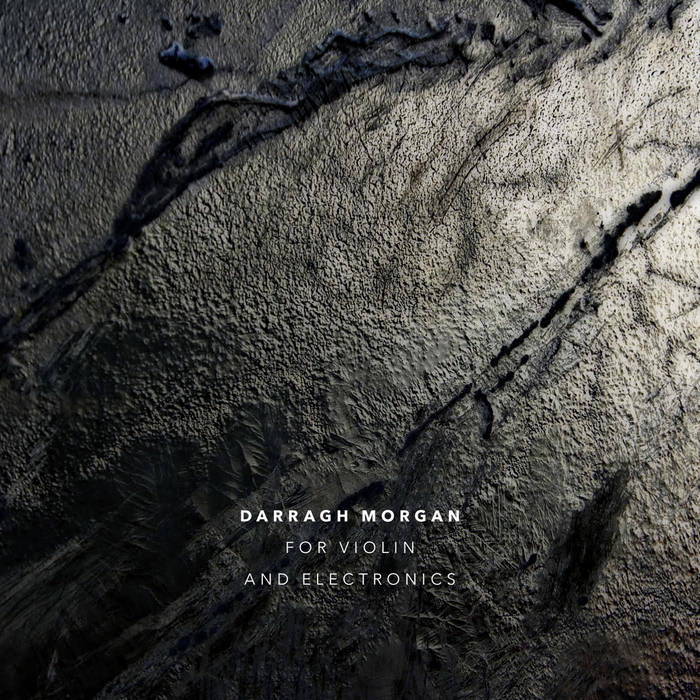 "A remarkably evocative showcase for one of the most adventurous violinists around, Darragh Morgan...challenging, intriguing, sonically very satisfying..a startlingly immersive experience.”


“Unsettling and thrilling in equal measure, this is a fascinating collection from a foremost interpreter of new music”


“For Violin and Electronics is exactly the kind of startling, thought-provoking album that can draw in listeners unfamiliar with classical music, old or new, but open to adventurous sounds. While each piece is unique, both in terms of tonalities and mood, the album as a whole is an unearthly experience”

Mastered by Chris Corrigan at SARC
Photographs and design by Max Franosch
Produced by Nick Roth for Diatribe Records, Dublin

Some of its Parts is an experiment in modular composition: a ‘tape piece’ plus any combination of violin, piano and percussion – a theoretical seven different mixed versions of ‘the same’ work; the jury is still out on two theoretically possible further versions: a purely acousmatic work comprising the fixed sounds alone, and a purely instrumental trio, without the electronic element.

This project began conventionally enough, when violinist Darragh Morgan asked me to write him a piece. Whilst developing material for this work, I became increasingly aware of the noisy, percussive nature of some of the material; a later request from percussionist Simon Limbrick for a piece with electronics caused me to link the two things in my mind. When, later still, I heard pianist Xenia Pestova performing works for piano and electronics, the full extent of the scope of the Some of its Parts project started to come into focus.

The performers are required to interact with their instruments in a number of ways, employing a variety of ‘extended techniques’. Echoing this, the material in the tape/computer/electronics part is primarily drawn from non-standard ways of playing strings, piano and percussion, together with a selection of materials (springs, creaking doors and shutters, wooden floors, curtain rings sliding along a wooden pole) related to the live instruments – by sound and/or by the elements used to build the instruments concerned (wood, metal, etc) and/or by the physical principles contributing to their character (tension, friction, pressure, etc). The resulting sound world is thus a hybridised, unreal place – but it is hopefully also ‘more than the sum of its parts.’

As well as Darragh Morgan, Simon Limbrick and Xenia Pestova, I should like to thank the members of the Thürmchen Ensemble, Cologne for their instrumental recordings, which also formed the basis of Force Fields (2004-06) for 8 instrumentalists and fixed sounds and Phantom Power (2007-08) for 8-channel tape. Thanks also go to Erik Oña & Helena Bugallo, Savannah Agger & Gerhard Behles, Molly & Geoff Warne, Nancy Harrison, Clare & Emma Harrison and Alison Warne for – knowingly or inadvertently – aiding and abetting the process of providing, gathering and recording the sound materials used in this project.

Flame takes its title from the so-called 'fractal flame' animations which form the core of its optional interactive video component. The sonic material is based around another 'self-similar' phenomenon, the harmonic series, which forms the basis of most traditional musical sounds. The piece's overall structure relates loosely to the tuning of the open strings of the violin, and the electroacoustic sounds are derived entirely from recordings of violin sounds. These sounds are re-synthesised in real-time, but with alterations to their spectra; notably pitch-shifting of their harmonics by further harmonic ratios in various patterns, creating rich, just-intoned 'clusters'. The spectral components of the sound are also distributed spatially, literally placing the audience within the notes of the violin. At times these harmonics can be heard separately, splitting the sound into many separate 'notes', and at other times they fuse together, making the source difficult to locate; an enjoyable ambiguity. The noisier aspects of violin sound (a particular favourite) are given special treatment, exaggerated and shaped; the crackle of the fire, so to speak.

I would like to thank Darragh Morgan, who commissioned the piece, for his enthusiasm and plentiful suggestions, both of which I found immensely helpful. Flame is also dedicated to Jennifer Waring, for her honesty, friendship, encouragement, and enduring enthusiasm for all things musical.

This piece was composed during the winter of 2007 and was completed very near Christmas. Trapped in ice is a composition inspired by the frozen landscapes surrounding my home in County Down, Northern Ireland during the cold months. The piece deals with limitation and restriction of the musical material: nearly every musical idea is constrained in some way. Sometimes, the musical material breaks free from its prison; revealing a soaring melody built with natural and artificial harmonics. This idea reflects the frost encrusted land, seemingly devoid of character barren, desolate and unrecognisable. However, under the veil of ice and even snow, things still move, slither, crawl and grow. In this piece the melodic material is constantly struggling to compete for time and space within a rather barren musical landscape.

I’m drawn to the analogy of a scene that ripples and distorts, something familiar transformed through glacial shifts and prismatic effects. With this in mind the piece loosely explores the material through a sort of theme and variation, shifting colours on a surface. The title of the piece is taken from an article by the art critic Jonathan Jones and describes a series of abstract paintings by the German artist Gerhard Richter entitled “Cage (1-6)”. These paintings are Richter’s homage to the American composer John Cage.

Stringscape was commissioned by Darragh Morgan and is dedicated to him and his wonderful virtuosity. It was composed between July 2009 and April 2010. It was first performed at Trinity College of Music, London and the University of Leeds in April 2010 and subsequently in Manchester, Belfast, Dublin, Canterbury and Cardiff. It was also performed at the International Computer Music Conference in Huddersfield in August 2011.
There are three characters – lyric, drone and texture. It’s difficult to tell the difference at times. You might glimpse Berg (and a hint of Webern) in the lyric, Ligeti (and many others) in the texture and minimalism in the drone. A mosaic of these materials changes focus as the piece progresses. The electronics provide the dynamic ‘scape’ at the centre of which our soloist stays firmly rooted.

To write Koorean Air in collaboration with virtuoso violinist Darragh Morgan was very fun and rewarding. The nature of the methodology I employed in the compositional process dissolved the differences between composer and performer to the point that I no longer consider this work to be my piece but rather his piece or at least, let us say, our piece. However, I am glad that he is the one who premiered it, because I would not know what to do his £80,000 violin in my hands…

In the last few years, I seem to be less and less interested in what I think and more and more in what other people think, especially when we are exploring sound and gesture. It is like making a sonic documentary film of a performer. As a result, I have composed a number of pieces with the intention to feature (if not steal) the DNA of virtuoso performers; e.g. Esther Lamneck, Elisabeth McNutt, Kontakte Grup de Percussio and now Darragh Morgan, to go beyond my sonic creativity, by challenging their aural thinking through the process.

On a different matter, I presume that a piece for solo instrument is just that, a solo instrumental work. For years I wondered why when we combine solo instruments with electronics, in most cases, the end result becomes astronomical, hyper-loud and expansive, compared to the natural force of the instrument. In Koorean Air, I explored a process of electronic de-hyper-instrumentalisation (should this word exist!). I hope audiences will experience the electronic counterpoint as simply a dialogue between the violin and its true mirror, which is the performer's fingerprints.